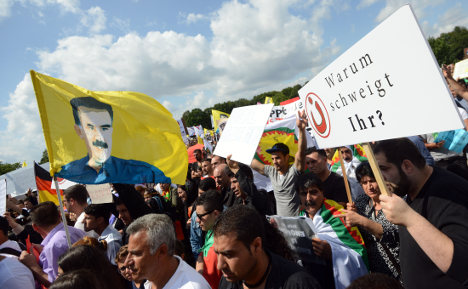 Ministers on Sunday agreed a further €1.5 million in aid for emergency humanitarian measures in Iraq in addition to the €2.9 million pledged on Friday.

"We have to help these people," German Foreign Minister Frank-Walter Steinmeier told the Süddeutsche Zeitung on Sunday, referring to the tens of thousands of Yazidis trapped by Islamic extremists in the north of Iraq.

The minister said he had been in contact with the president of the Kurdish autonomous region, Masoud Barzani, "to see whether we can offer support in this extremely critical situation".

Barzani had requested weapons for Kurdish troops to repel the advancing militia of the Islamic State (IS), but it remains unclear whether Germany will send any military aid.

The UN estimates around 200,000 people have fled their homes in Christian and Yazida villages in northern Iraq since last Monday as IS continues its march north.

Germany must also, together with the EU, "actively ensure that the terror organisation IS is deprived of its political support within Iraq and in the region," Röttgen told the paper.

Social Democrat human rights expert Rolf Mützenich said: "If Germany was to [increase support] as part of a European initiative in addition to the financial and humanitarian measures, we would have to discuss with the public and especially with parliament."

"They didn't do that with a yoga mat under their arm, they did it with weapons," he said.

"German foreign policy in Iraq has many more possibilities than it is currently using," the party's foreign policy spokesman Omid Nouripour told the Tagesspiegel paper.

Up to 90,000 Yazidis – a Kurdish speaking ethno-religious community – are thought to live in Germany. Seven people were arrested on Saturday during a mainly Yazidi protest in the western town of Bielefeld in which demonstrators called for an immediate response to the crisis.

Eight hundred police were deployed to control the 3,500 protesters after an earlier protest turned violent on Wednesday night.

Five men were arrested for carrying weapons and another was arrested when a gun was found in his car, police said in a statement.

Another man was arrested after he attacked a police officer with a roof beam. Bottles were thrown at police by protesters carrying signs asking "why are you silent?"