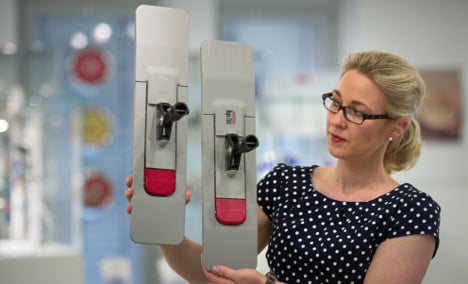 A woman shows a German-made mop head and a near-identical copy. Photo: DPA

Just under a quarter of all plagiarized technical products examined were sold by a German company, the study by the Federation of German Machine and Equipment Builders (VDMA) has found.

Germany was behind China, but ahead of Turkey and India in terms of the number of copies sold.

Most German firms involved in plagiarism targeted competitors in the high-tech sector, in contrast to Chinese manufacturers, which usually copied low-quality goods.

The federation valued the overall cost of plagiarism to the high-tech sector at around €7.9 billion in 2013.

“Many firms are worried that their reputation is suffering [from plagiarism],” said VDMA's chief of product and know-how protection Steffen Zimmermann.

It's more common practice in Germany than people think, Christine Lacroix of Aktion Plagarius (AP), an anti-plagiarism and counterfeiting organisation, told The Local.

Firms ordered everyday items such as ventilators and hand dryers copied from a competitor's designs from China, to be sold in Germany and other EU nations.

They were often located in the same region or the same town as the competitor they were hoping to undercut.

“German companies are getting better and better at that,” said Ms Lacroix. “If a competitor's made a great new product, you send an example to Asia and ask how quickly and cheaply they can copy it.”

“Bad quality plagiarized products associated with the brand names of the originals can of course damage their reputation,” Lacroiy explained.

However, some customers seek out plagiarized products because they are cheaper.

“The biggest cost and time investment in every new development is the cost of research and development,” Lacroix said.

“If I can save all that, of course I'm much faster and I can save on a lot of costs.”

“If the other business is selling for 100, I can sell for 90, and I'll probably have more customers.”

Lacroix cited the recent example of a magnetic mop head produced by a manufacturer in Baden-Württemberg, which was copied almost exactly by a competitor just 200 kilometres away in Franconia, northern Bavaria.

Other cases involved a competitor ordering copies from abroad to compete with German-made products.

The European Commission released figures in July showing that €768 million of plagiarised and counterfeit goods were discovered across all member states.