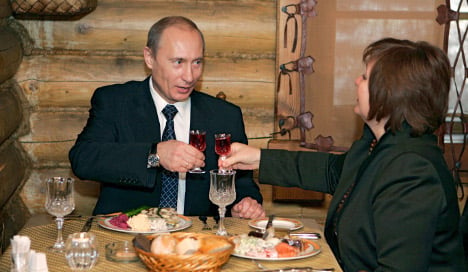 Putin in a Moscow restaurant in 2007 with his wife at the time. Photo: EPA/DMITRY ASTAKHOV

The import ban includes meat, milk and dairy products, as well as fruit, fish and vegetables. It targets all countries that have taken punitive measures against Moscow, including the US, EU members, Australia, Canada and Norway, Reuters reported.

The ban will last one year and is valid from Thursday.

German food exports to Russia were worth €1.6 billion in 2013, a decline of 14 percent on the year before, according to figures from the Ministry of Agriculture.

Meat and dairy products made up the lion's share of food exports and were valued at €346 million and €165 million respectively in 2013.

But trade declined sharply on 2012 – dairy exports fell by 45 percent and meat products dropped by 30 percent.

Other important foodstuffs exported to Russia were baked goods, chocolate, coffee and wine, but they are not set to be affected by the sanctions.

Fruit and vegetable exports to Russia were worth €29 million in 2013, while fish was worth €5 million.

According to Eurostat, combined EU food exports to Russia were worth €11.8 billion in 2013, less than one percent of all EU exports in total.

A spokeswoman for the American National Security Council told news agency DPA that the measures would only serve to further isolate Russia and weaken the country's economy.

The Russian central bank has already warned that an import ban would lead to higher interest rates.

Germany was until recently Russia's second-largest trading partner behind China and 9.4 percent of Russian imports came from Germany in 2012, according to Germany Trade and Invest (GTAI).

Its main exports – vehicles, chemical products and mechanical engineering products – are not set to be directly affected by the sanctions announced on Thursday.

Russia's economic retaliation comes after Germany announced on Monday that a deal to build a training centre for Russian troops would not go ahead.

In a phone conversation on Wednesday evening, Chancellor Angela Merkel urged Russian President Vladimir Putin to put pressure on pro- Russian Ukrainian rebels to agree to a ceasefire with the Kiev government.

She also expressed her concerns that the separatist rebels were receiving new supplies from Russian territory, the Chancellor's office said in a statement.

SEE ALSO: 'Only losers in economic war with Russia'