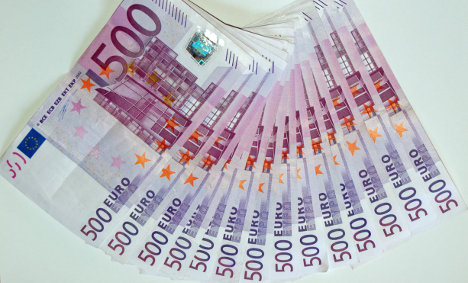 The three 15-year-olds were riding their mopeds on a field road near Riedenheim in Bavaria on Tuesday evening to find the spot where one of them had lost his exhaust pipe six months earlier.

After they stopped on the edge of a dirt road, they walked to the trees to see the site. It was there that they came across a roll of money, made up of 24 €500 notes.

The honest youths then took the cash home and told their parents, who took them to the police to turn it in.

It wasn't until later that the owner, a business man from Weikersheim in Baden-Württemberg, called to report his loss and police could share the good news that his money had already been found.

The very relieved man was then reunited with all €12,000 on Wednesday morning. He had gone back to the spot to find the money, but by then it was already safe and sound in the hands of police.

Police told The Local they could not share why the man had that much cash on him or how he came to lose it in the woods as it would reveal his identity, something the butter-fingered businessman didn't want.

The three teenagers were rewarded with €200 each for their good deed.