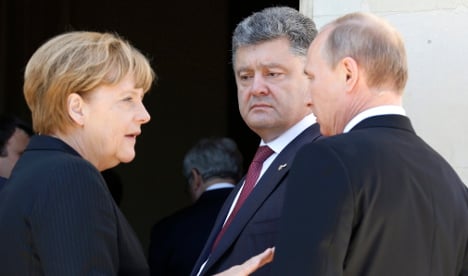 Merkel with Poroshenko and Putin in June. Photo: DPA

Government spokesman Steffen Seibert struck back at the story on Thursday morning, tweeting: "The report has no basis."

According to the British newspaper The Independent, under the controversial deal, the international community would have to recognize Russia’s annexation of Crimea. In return, Ukraine’s borders in the east would be stabilized and gas supplies to the Ukraine from Russia would be secured.

The paper cited sources close to the negotiations claiming the first part of the deal would require Russia to withdraw support for the rebels in eastern Ukraine.

Ukraine would have to agree to not join Nato and Russia would then offer a long-term agreement with Russia gas giant Gazprom to secure its gas supplies.

Russia would also pay Ukraine for the loss of rent from the Russian naval fleet in the Crimea caused by the annexation of the Black Sea peninsula.

According to the Independent, Merkel has been trying to broker the deal between Putin and Ukrainian President Petro Poroshenko for some time, but it was put on hold after the shooting down of Malaysia Airlines flight MH17.

However, sources told The Independent the “peace plan is still on the table and the only deal around. Negotiations have stalled because of the MH17 disaster but they are expected to restart once the investigation has taken place."

“It is in everyone’s interests to do a deal. Hopefully, talks will be revived if a satisfactory outcome can be reached to investigations now taking place as to the causes of the MH17 catastrophe,” insiders said.

However, the deal is unlikely to be palatable to other Nato countries who have refused to recognize Russia’s annexation of Crimea from Ukraine.

On Wednesday, Germany and other G7 countries issued a statement on Ukraine criticizing Russia and describing the annexation of Crimea as "unacceptable".
"We once again condemn Russia’s illegal annexation of Crimea and actions to destabilize eastern Ukraine. Those actions are unacceptable and violate international law."
Merkel has attempted to act as a bridge to Putin from the West and Germany was reluctant to impose tough sanctions on Russia over its behaviour in Ukraine until this week.

Germany and Russia have strong economic and cultural ties, with trade between the countries worth €76 billion in 2013.