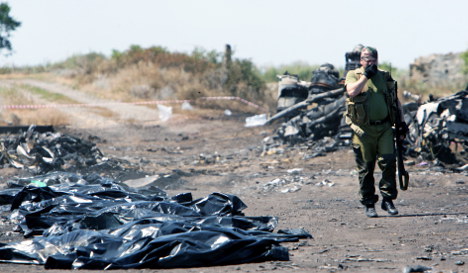 An armed separatist walks past the bodybags of victims of the MH17 crash. Photo: EPA/IGOR KOVALENKO

Frank-Walter Steinmeier said "the terrible deaths of hundreds of innocent people in the plane crash a few days ago, the ghastly images of the crash site and the ruthless behaviour of the separatists have rightly caused outrage and shock around the world".

With Russia still failing to rein in the pro-Moscow insurgents or halting the cross-border flow of fighters and weapons, and no ceasefire in sight, Steinmeier warned of the risk of a further "dramatic escalation".
"All this we will have to discuss in the group of European foreign ministers [on Tuesday]," said Steinmeier, adding that it will be "no easy session".
"We will have to raise the pressure to achieve the results that all European foreign ministers believe to be necessary," Steinmeier said after meeting his Hungarian counterpart Tibor Navracsics.
Germany's top diplomat added that the foreign ministers will also have to debate how, "aside from the heightened pressure and sanctions, we can return to a resilient political process that indeed promises to lead to a ceasefire".
SEE ALSO: Tributes paid to German victims of MH17