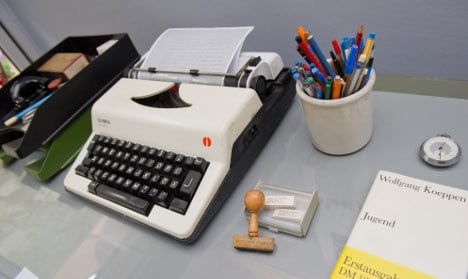 The secure desk of the future? Photo: DPA

The head of the parliamentary inquiry into spying by the US National Security Service (NSA) in Germany made headlines last week when he said his committee was considering using typewriters. But he is not alone.

With a turnover of €5 million, the German typewriter market is growing.

Manufactures Olympia and Bandermann are seeing a revival in what was until recently a dying technology.

"We sell about 10,000 (typewriters) every year," Bandermann manager Rolf Bonnen told The Local. Sales grew around a third last year on 2012.

"We’ve seen an increase because Brother left the market," Bonnen said, referring to the end of typewriter production in the UK in 2012.

Asked about reports that the company delivered to Russian intelligence, Bonner joked: "No (spy) has come into my office, put an untold number of bills on my table and in a Russian accent asked for 20 typewriters."

Last year Triumph Adler, which is part of Bandermann, made a YouTube video to promote its product as "Bug proof. NSA proof," after the Russians' interest was first reported by German media.

And an Olympia spokesman told Wirtschaftswoche magazine that the company expects to sell more typewriters this year than at any time in the last 20 years, with sales set to double in 2014.

"We will certainly cross the 10,000 threshold," manager Andreas Fostiropoulis said.

He confirmed to Wirtschaftswoche that their Russian business partners had asked for 20 typewriters, apparently for the country’s secret services.

Back to a secure future?

And at least one German company has already returned to typewriters instead of emails and PDFs.

Manufacturing company Diehl, whose products include defence equipment, made the switch last year.

CEO Thomas Diehl said last year that at Diehl, highly sensitive data only existed on paper. "This is still the case," said Prymelski.

But not everyone thinks typewriters are an effective way of securing communication.

The spokesman for the centre-left Social Democrats (SPD) on the NSA inquiry, Christian Flisek, dismissed the idea of returning to typewriters, saying it would make the inquiry a subject of "ridicule".

"The idea that one would return to the typewriter to protect oneself against surveillance is absurd," Flisek said.