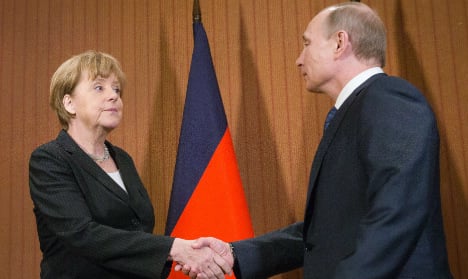 The two leaders, who spoke on the telephone, "agreed that an international, independent commission under the direction of ICAO (UN's International Civil Aviation Organization) should quickly have access to the site of the accident… to shed light on the circumstances of the crash and move the victims," said a German government statement.

A Kremlin statement on the same phone call said that "both sides stressed the importance of a thorough and objective investigation of all circumstances relating to what has happened" and said Merkel gave a "positive assessment of Russia's readiness to send its representative to participate in the investigation." The two leaders also agreed that a contact group comprising Ukraine, Russia and the OSCE should meet "quickly" with the aim of reaching a ceasefire in the conflict between Kiev and the pro-Moscow rebels in eastern Ukraine, said the German government statement.

"The chancellor once again asked President Putin to exercise his influence over the separatists in order to reach this objective," it said.

In a possible barrier to further talks, however, the Kremlin statement said the contact group should include separatist representatives, a move opposed by Kiev.

Ukraine, meanwhile, accused rebels at the crash site of trying to destroy evidence.

Crash investigators from the OSCE have also had their movements blocked and been restricted from parts of the site by the pro-Russian separatists, they said on Saturday.