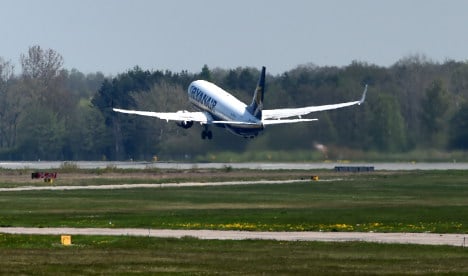 A Ryanair flight takes off from Lübeck Airport. Photo: DPA

Starting in October, Ryanair will start flying from Hamburg to Portugal.

The Irish airline will be jetting off from Hamburg Airport to Lisbon once a week and Porto three times per week, it announced in a statement.

About 150,000 passengers per year will hop on board the return route, with tickets beginning at €24.99 a person, estimated German marketing manager Colm 'O Shea.

The airline is in turn scrapping its flights from the insolvent Lübeck airport, previously its only other northern German hub situated about 90 minutes from Hamburg.

Lübeck Airport was declared insolvent earlier this year and has been bought by Chinese investors.

Ryanair currently operates out of 13 airports in Germany, including Berlin's Schönefeld. In Hamburg, it will compete with four other budget carriers.

Ryanair's rival Easyjet opened a base in Hamburg earlier this year.