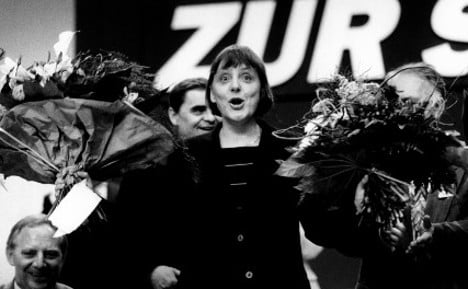 Museum The Kennedys in Berlin is displaying an exhibition of 60 photographs devoted to the last 20 years of the chancellor's life.

Since 1994, he has photographed scenes ranging from the chancellor's elated face upon her election in Essen to party leader to her walking through the White House with President Obama in 2011.

Biskup also caught the chancellor during her down time, with photographs such as Merkel browsing through a newspaper at Café Einstein in Berlin, and peering off a ship in Greenland, included in the collection.

As a subject, Merkel is "very photogenic, with wit and charisma and a charming laugh," Biskup told Bild on Wednesday.

Merkel will mark her birthday with a celebration at her CDU party headquarters with 500 guests and a talk by an expert in globalization.

Merkel, a trained chemist, invited a brain researcher to speak at her 50th birthday in 2004.

Museum The Kennedys opened in 2006 in a former Jewish girls school in Berlin. The exhibition is open from Tuesday through to Sunday from 11am to 7pm. The exhibition runs from July 17th until August 17th.