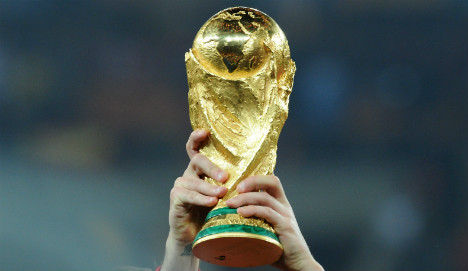 The bookies reckon Germany will be holding the trophy aloft on Sunday night. Photo: DPA

Major betting firms have the Germans as odds-on to win the tournament after their 7:1 semi-final demolition of hosts Brazil.

Alex Donohue of Ladbrokes said: "The semis couldn't have been more different but we're betting Argentina will raise their game for the final.

Germany are just favoured to edge it at this stage in a game that looks set to break betting records."

In the match itself, Ladbrokes have Germany at 13/10 to win without going to penalties, a draw after 90 minutes or extra time at 21/10 and an Argentina win without penalties at 12/5.

In the semi-finals, Germany thrashed hosts Brazil 7:1, while Argentina went through on penalties after a goalless draw with the Netherlands. Punters have since been stacking up bets on Germany, despite the shorter odds. On Saturday, 95 percent of all World Cup final bets were for Germany.

"Germany have been incredibly well-backed. They are the favourites to win the final," William Hill spokesman Joe Crilly told AFP.

"Their performance in the semi-final has prompted plenty of people to wager that they will lift the World Cup — and I'm not surprised at all.

"You would have thought that British punters wouldn't want to back the German team but they're really betting with their heads rather than with their hearts this time around."

After Germany beat Brazil 7-1 on Tuesday, William Hill maintain the odds of 500/1 on the same score in the final.

"500/1 is the biggest correct score price we offer online and who knows, lightning might strike twice — in which case it should probably be a little bit shorter," said Crilly.

The chain makes a 1-0 Germany win their most likely final score, at odds of 11/2.

However, the most popular scoreline with punters is 3-1 to Germany, at 20/1.

The bookmaker's biggest wager on Germany is £140,000 placed at 5/2, while their biggest bet on Argentina has already made a 100 percent profit.

Even before the final, 2014 is William Hill's biggest World Cup ever having made twice the amount it did in 2010.

"At the start of tournament, we made a £200 million prediction for turnover. We've broken that already with two games to go. We predicted 17 million bets, and that's also been broken," said Crilly.

He said the best result for bookmakers was Brazil's goalless draw with Mexico in the group stages, while the best for punters was Brazil's 3-1 win over Croatia in the opening match of the tournament.

Ladbrokes said it was expecting "the biggest and busiest football match in betting history" with up to £40 million expected to be wagered on the final, while William Hill put the figure at £50 million.

Argentina striker Lionel Messi is 50/1 with William Hill to have a goal disallowed for handball.