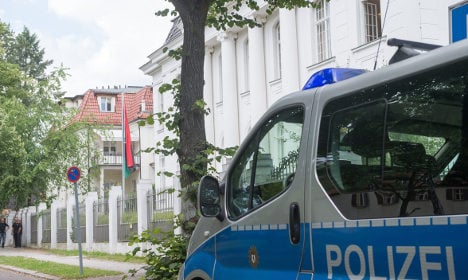 The Libyan Embassy in Berlin on Friday. Photo: DPA
The 25-year-old suffered life-threatening injuries, police said, after he poured oil over himself and then set himself on fire.
Security staff at the embassy managed to put out the flames burning the Tunisian-born man, but not before he had severely injured himself.
His act did not appear to be a political one, rather, he was in an ongoing dispute with the embassy over compensation payments for wounded soldiers, police said.
The man arrived outside the embassy in the Dahlem area of the city on Friday morning with a canister. When he was challenged by security staff he poured the oil on himself and then ran while on fire across the street to a grass verge.
Security guards caught up with him and pulled his clothes off. Police officers, who happened to be nearby, also rushed to help the man and threw a blanket over him.
He was then flown by helicopter to hospital.