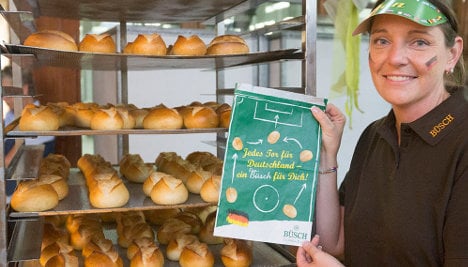 An employee at Büsch bakery poses with a poster promising a free bun for every German goal. Photo: DPA

Bars had to give away hundreds of litres of free beer and bakeries were left without buns after customers took full advantage of their goal-related offers.

Büsch Bakery, a chain in North Rhine-Westphalia, offered its customers a free bun for every German goal throughout the World Cup. It was a risk-free affair until the goal fest against Brazil in the semi-final on Tuesday night.

"I don't have exact numbers yet but we gave away hundreds of thousands of buns," manager Dirk Jonack told The Local on Thursday.

"We had nothing left," he added. Many customers had to put up with vouchers because there was simply no stock left.

Asked whether he secretly hoped a potential German victory in the final would be a little closer, the football fan in Jonack took over.

"Not really. A big victory over Argentina would be wonderful," he said.

When Schraders Bar in Berlin promised its customers "rivers of free shots" for every goal before the game on Tuesday night, its owners did not expect that more than 1,000 glasses would be handed out during the game.

In what could be a good omen, the bar will make the same offer for Germany's final against Argentina on Sunday.

A restaurant in Hamburg is looking forward to Sunday night, too, but has not said whether it would offer fans the same deal it did on Tuesday.

For every German goal, the up to 1,500 guests of Landhaus Walter in Hamburg's Stadtpark were promised 50 litres of beer.

At the end of the night, 350 litres of beer had been given out, the Hamburger Morgenpost reported.

Ringk garden centre in Brakel probably wished it had made a similar move. Customers there got 70 percent off all products – ten percent for every goal.

The resulting stampede of garden enthusiasts brought traffic to a halt in the North Rhine-Westphalia town of 23,000, reported Westfalen-Blatt.

"It was very stressful but our customers were of course happy," an employee told The Local on Thursday.

She said no decision had been made yet on whether the offer would be repeated for the final on Sunday. Brewery "Dampe" in Essen promised its 300 guests shots for every German goal.

"At some point my co-workers just put the boxes on the bar and told our guests: Help yourself," employee Karin Flemming told Der Westen newspaper.

And online health food retailer Schneekoppe, was forced to apologize to customers. Its servers were unable to cope when customers wanted to make the most of Schneekoppe's 60 percent discount – ten percent per goal capped at 60 percent.

"Due to the great popularity of our World Cup offer, technical difficulties may occur," a note on the website said.

But while most businesses took Tuesday's result and its consequences in their stride, a fashion store owner in the Hessian town of Groß-Gerau was audibly annoyed when they spoke to The Local.

Tabloid newspaper Bild reported the store had advertised the same ten-percent offer but limited it in retrospect to 50 percent on the morning after the game.

Owner Christine Gärtner disputed that version on the phone with The Local. "Bild completely screwed me," she said. When asked for her account, Gärtner demurred.

"I absolutely don't want to say anything more about this topic," she said, sounding like she could not wait for the World Cup to be over.