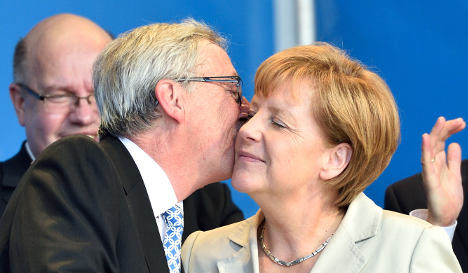 Juncker, 59, was named the new president in Brussels after a meeting of the 28 member states. Cameron had fought aggressively to block the appointment of Juncker whom he sees as unable to deliver reforms to the EU.

Merkel, meanwhile, gently backed Juncker who was the lead candidate (Spitzenkandidat) for the European People’s Party (EPP) which won the most seats in the EU Parliament elections in May.

Cameron was left isolated by Merkel and his other allies in Europe, with only Hungarian prime minister Viktor Orban not voting for Juncker.

But according to Spiegel Online, Merkel "didn't want" Juncker as president. However, she was left with little choice but to back him as her CDU/CSU party sit with the EPP in the European Parliament and her coalition partners in Berlin pressed her to back Juncker.

Juncker’s appointment as president for the next five years will now have to be ratified by the EU Parliament with at least 376 of the 751 votes.