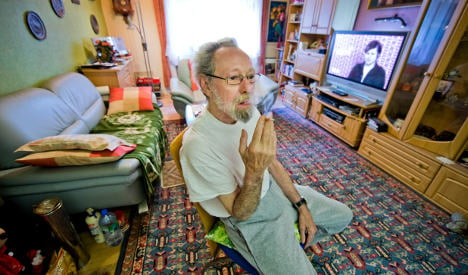 Friedhelm Adolfs in his apartment in Düsseldorf. Photo: DPA

Friedhelm Adolfs, 75, has until the end of the year to clear out his rented apartment in Düsseldorf, North Rhine-Westphalia, after neighbours and his landlady became fed up with the smoke and smell of his cigarettes.

His neighbours complained that they were being affected by the smoke from his apartment as he opened his door to let fresh air in and his landlady terminated his contract.

But Adolfs said he had not been warned about the termination and took the case to court.

Düsseldorf Regional Court said the "greatest infringement" was not the fact that Adolfs was smoking, but that his neighbours were being affected by it. Adolfs didn't ventilate the apartment properly or empty his ashtray regularly, the court heard.

"This is bad news for tenants in Germany," his lawyer said.

But the ruling doesn't stop smokers having a cigarette in their own home. It has set a precedent, however, that smokers should ventilate their homes properly.

Adolfs became a minor celebrity in Germany rising to prominence through his long-running legal battle. The retired janitor's lawyer described him as the “second most famous smoker after Helmut Schmidt”, referring to the chain-smoking ex-Chancellor. Sympathizers donated money to the pensioner for his legal expenses. But the hearing on Thursday in which his appeal on an earlier ruling was rejected may not be the last stage in the legal process. The case could still be taken to the Federal Court of Justice (BGH).

Adolfs lawyer said he would study the written judgement of the Düsseldorf court before making a decision about another appeal.