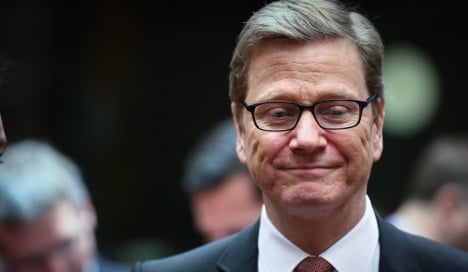 Ex-foreign minister Guido Westerwelle discovered that he has leukaemia by accident after seeking treatment for a sports injury, a party colleague told press over the weekend.

Westerwelle, 52, received the diagnosis after a knee injury he sustained while jogging on holiday in Mallorca, friend and FDP party colleague Werner Hümmrich told the Kölner Express on Saturday.

Doctors found irregularities in the politician's blood during a routine preliminary screening, said Hümmrich, and gave him a concrete diagnosis on Thursday.

He is shocked, said Hümmrich, "but also prepared to take up the fight and is confident that he can conquer the cancer. He's in good physical shape and has many friends – me included – who will help him through this difficult time and give him the necessary strength."

The Westerwelle Foundation made the announcement  on the politician's Facebook page on Friday.

Treatment is aimed at his "full recovery," wrote the foundation in statements in both English and German, without going into further details.

"On behalf of Guido Westerwelle and his family we kindly ask to refrain from further inquiries."

"I'm greatly dismayed to hear the news of Guido Westerwelle's serious illness. I wish him, also on behalf of all the employees of the foreign office, much strength for his fight against the illness and a speedy full recovery."

"Our thoughts are with Guido Westerwelle," tweeted the current head of the FDP Christian Linder. "We hope that he quickly and fully overcomes his illness."