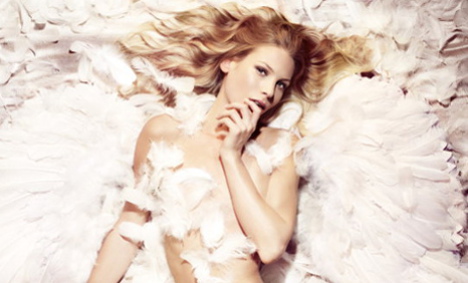 German model and actress Sarah Brandner, 26, will be supporting Bastian Schweinsteiger from the sides. The stunning blonde is a successful model, and has been modeling since she was 14-years-old.

In 2011, she was the model in the men's deodorant Christmas commercial for Axe and was voted by FHM as Germany's fourth sexiest woman in 2010.

And then there is Lisa Müller, 25, married to Bayern Munich star Thomas Müller, who does not fit the mould of a stereotypical footballer's wife.

Preferring horses to glitz and glamour, the pretty brunette is more at home in Bavaria riding her horses than walking down the red carpet. Down-to-earth like her husband, she is happy to drive her horse transporter and is seldom seen in the tabloids.

And the woman who serenades Mesut Özil, is German singer Mandy Capristo, 24. The long-legged singer has been voted as one of the sexiest women in the world by Germany's FHM.