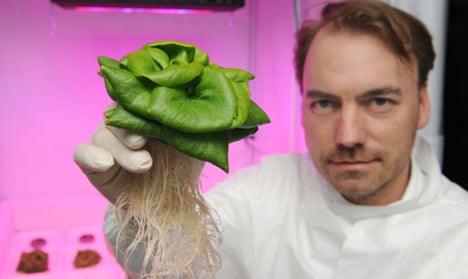 Engineer Daniel Schubert with one of the lettuces at the DLR centre in Bremen. Photo: DPA

As part of their research to develop the greenhouses, engineers from the German Aerospace Centre (DLR) in Bremen have already grown dozens of lettuces under a pink light in a sterilized laboratory.

The greenhouses will contain combined life-support systems which use recycled urine to manufacture fertilizer, helping to grow vegetables for a lunar and Mars environment.

For now, the team of researchers plans to grow vegetables that perish quickly.

“We wanted to master lettuce first, next is radishes,” said Daniel Schubert one of the project's engineers from the DLR. “The hardest are tomatoes and cucumbers.”

The plants grow extremely fast in a sealed system with up to 24 hours of light a day. They do not require soil but hang in the air, whilst their roots are constantly sprayed with a solution containing nutrients.

Eating fresh fruit and vegetables will not only provide the astronauts with nutritional benefits, the team said, but will also improve their mood.

“Anyone who spends two to three years in a tin can with artificial light, many cables and a high level of noise, is going to want to have something green around them at the very least,” said Schubert. He added that a little gardening in the astronauts' free time would also be good for their mood.

Another advantage of the greenhouses is that the plants will produce oxygen and give off a lot of water which can be used for drinking.

Transporting seeds rather than kilos of food will also save on cost and weight.

And several tonnes of special foods, enough for six astronauts, would be needed for a potential Mars mission as it would take two to three years to reach the red planet.

“If we transported that kilo to Mars, we're looking at a cost of nearly millions [of euros],” said Schubert.

The project is still in its early stages and, according to the engineers, the first round of lettuces do not taste that good.

But the researchers have set themselves a goal. The first greenhouse will be tested for nine months in 2016/17 in an inhospitable environment in the Antarctic.

SEE ALSO: Meet the Germans who want to move to Mars