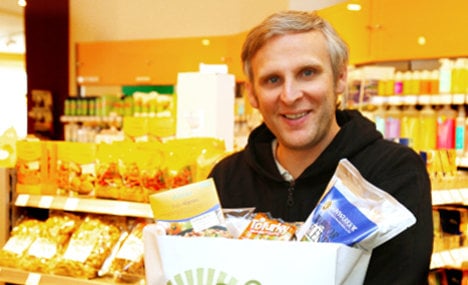 Veganz founder Jan Bredack in one of his vegan supermarkets. Photo: Veganz GmbH

Life before starting supermarket chain Veganz was very different for the 42-year-old Berliner who was working as a manager at Daimler.

After suffering burn-out, Jan Bredack decided to change his lifestyle and outlook on life, which he documented in his book “Vegan für alle: Warum wir richtig leben sollten” (Veganism for everyone: Why we should live right).

Bredack, who became a vegan in 2009, told The Local the idea to launch his first supermarket came after trips to Scandinavia, the US and Russia.

“The decision to open a vegan supermarket came from a potpourri of ideas after coming across various vegan products in the US and Russia,” he said, adding that as a vegan he found it hard to “shop normally”. Veganz currently has two supermarkets in Berlin, with a third to open this year. There are also stores in Hamburg, Munich and Frankfurt.

Further branches in Leipzig and Essen will be set up this year with more planned in Essen, Stuttgart, Cologne, Hanover and Düsseldorf.

On May 13th Veganz will open its first store outside Germany in Vienna, with further planned for London, Amsterdam, Zurich, Barcelona, Milan and Copenhagen next year.

Bredack also hopes to take the vegan chain to the other side of the Atlantic. In 2016, Veganz will open a vegan shopping center in Portland, including a shoe and clothing store and restaurant. Walking into a Veganz supermarket you would be hard pushed to believe that there were no animal products around. Every type of food that you would expect in your usual supermarket is available, from cheeses to different kinds of “fish” and “meat” including, “Tofurky”, “duck” and even “currywurst” and “schnitzel”.

Bredack, a former meat eater, pointed out that Veganz is not aiming to turn the world vegan, but just to make a vegan lifestyle possible to everyone without great effort.

“It should be really simple,” he said, “People shouldn't have to cut out anything.”

But not all of the chain’s customers are vegan. According to Bredack, 80 percent are neither vegan nor vegetarian. They also seem well-educated; Bredack said 60 percent had a university degree and 17 percent were students.

Veganz has attracted criticism from some shoppers as its supermarkets house a bakery chain which used to sell meat products and still sells dairy items. Veganz also has many items shipped in from across the world.

But Bredack dismissed those worries saying all products that come from the US and Canada are transported in cargo ships.

According to the World Shipping Council carbon missions report, container ships emit 10g of carbon dioxide per kilometer for each tonne of cargo compared to 470g released by airfreight.

Bredack added he knew all 272 of his suppliers who come from over 30 different countries.

Bredack is taking Veganz a step further, as they plan to take their food to festivals, music and sports events in a mobile snack trailer. From the specially designed food trucks they will offer vegan hotdogs and burgers and plan to tour Europe.

“It's been an incredible challenge but we aim to make 30 burgers in 10 minutes,” he said, “This really is a dream.”

The pressure of establishing the Veganz chain in such a short time is just as intense as it was working at Daimler, Bredack said.

“I do it because it comes from the heart. Money is not the motivation, but the chance to do something good in life,” he added.