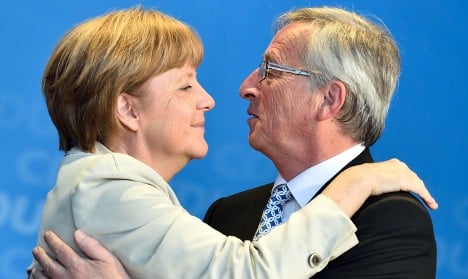 "I am holding all talks in this spirit, that Jean-Claude Juncker should become president of the European Commission," Merkel said about the conservative candidate, according to her spokesman Steffen Seibert.

She made the comment, her clearest yet on who should lead the EU executive, at a Catholic church meeting in the southern German city of Regensburg.

EU leaders have traditionally named the Commission head on their own, but under new rules they now have to "take into account" results of last Sunday's European parliamentary elections, though the exact definition of that remains unclear.

In Sunday's vote, the centre-right European People's Party (EPP) – to which Juncker's and Merkel's party belong – will be the biggest, if somewhat reduced, single political group.

But Juncker will need the help of the Socialists and his main rival, the Socialist candidate Martin Schulz, a German, in order to command a governing majority in the 751-seat parliament.

All five candidates from the outgoing parliament's major groups have warned of political turmoil if EU leaders do not choose the next Commission head from among them, relations with Parliament would be severely damaged.