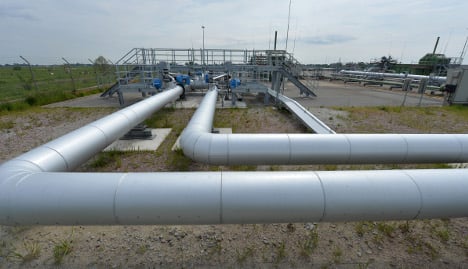 German gas storage facilities are currently up to around 70 percent full, the Federal Economic Ministry said on Wednesday.

Experts say this would be enough to last the country for several weeks in mild weather if the supply from Russia were cut.

Germany's 51 gas storage facilities are the fourth biggest in the world with a combined total capacity of 23 billion cubic metres – more than a quarter of the nation's yearly gas requirement.

Across the EU, gas storage facilities are estimated to be just over 59 percent full.

Russia has demanded that Ukraine pay back $2 billion in debts by the end of the week. If it fails to do so, Russian gas giant Gazprom will only continue to deliver to the crisis-stricken country if it pays in advance.

Ukraine is the most important transit country for gas imports to Europe. A similar Russian threat was played out in 2009 and led to gas shortages in Europe.

The German Economics Ministry emphasized there was "currently no indications of restrictions on deliveries," whether oil, gas or other products.