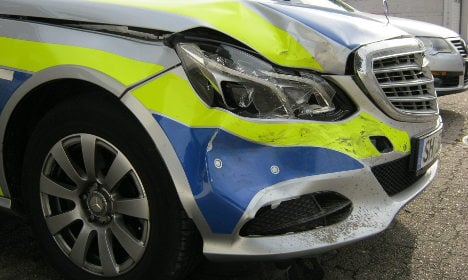 One of the smashed police cars following the chase. Photo: Flensburg Police

Police officers had attempted to pull over the 14-year-old after they noticed a white Chevrolet SUV speeding and skidding through the city at around 2am.

But the driver failed to react to the blue flashing lights and siren, instead slamming his foot on the accelerator and speeding off at around 120 km/h, police said in a statement.

Reaching a straight bit of road, the teenager sped up to 200 km/h, hitting the hard shoulder and the kerb at times but managing to retain control over the vehicle.

Police tried using road blocks to stop the boy – but he drove straight through them.

Officers said the car then stopped briefly and let out a passenger, a 16-year-old from Flensburg, who was arrested, and the vehicle then sped off again.

It hit a traffic island, getting a flat tyre in the process. After that the joyrider was limited to 50 km/h and smoke was coming from the car.

Two police cars then managed to trap the moving car in a pincer movement, but the driver rammed back and forth and managed to dislodge his vehicle, damaging both police cars. One officer was injured and had to give up the chase.

The second eventually trapped the car again. Police said they arrested the boy using pepper spray after he threatened officers with a knife.