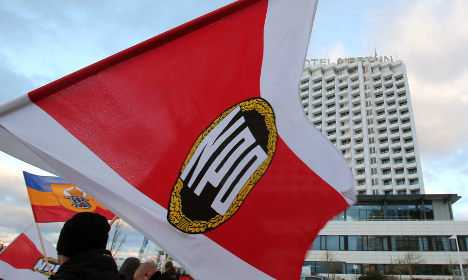 "There is no doubt that many populist, eurosceptic and even nationalistic parties are entering the European Parliament," Frank-Walter Steinmeier said, speaking on NTV television.

"In some countries it won't be as bad as had been feared, for example in the Netherlands, but France's National Front is a severe signal, and it horrifies me that the NPD from Germany will be represented in the parliament," he said, referring to the extremist anti-immigrant National Democratic Party of Germany.
"I hope that the democratic forces will find ways to work together and that the many leftist and rightist nationalistic parties won't be strong enough to define European policy."
In France the FN won just over 25 percent, while in Britain the anti-EU UK Independence Party looked set to score a historic victory. The anti-EU Danish People's Party was also victorious, while far-right groups had strong showings in Hungary and Greece, though not the Netherlands.
While in Germany Merkel's conservative party and the centre-left Social Democrats were the clear winners, newcomer the anti-euro Alternative for Germany took seven percent.
The NPD scored about one percent, enough to send a legislator to the European Parliament for the first time, after a hurdle requiring parties in Germany to get a minimum of three-percent of the vote to win a seat was lifted.
It meant also meant that a satirical party promising to "milk the EU like a small, southern European country", won a seat.
Germany's upper house of parliament is working on a case before the constitutional court to ban the NPD, which Merkel's spokesman has labelled an "anti-democratic, xenophobic, anti-Semitic, anti-constitutional party".
GALLERY: Protesters stop neo-Nazi Berlin march The leader of Germany's Jewish community on Monday also denounced gains made by far-right parties and urged democratic forces to block their path and defend European values.
Dieter Graumann, the president of the Central Council of Jews in Germany, said the extremist parties performed "shockingly well", as feared, in Sunday's European parliamentary vote.
He pointed to France, Hungary and Greece, saying in a statement: "Right-wing MPs are now coming into the European Parliament from all over Europe in order to implement their anti-European and extremist course."
"Democratic parties are now called on to curb this way of thinking and to defend and maintain European values," Graumann said.
He also said that the "spectre of anti-Semitism" had become a "brutal reality" after a gunman shot dead four people at the Jewish Museum in Brussels on Saturday.
"Such a thing can never be accepted and this message should be the very first which emanates from the new European Parliament," Graumann said.
Graumann also described as "intolerable" the winning of one seat by the NPD.
Racism and anti-Semitism must have no place in Europe, Graumann warned.

Meanwhile, Merkel on Monday praised the "solid result" of her conservatives in the elections, while saying the rise of far-right and populist parties was "remarkable and regrettable".

With neither the conservatives nor Socialists having won a clear majority, she said "there must be talks" on who fills the post of European Commission president to succeed Jose Manuel Barroso.
The talks would deal with both who should take the EU's top executive post and topics such as how to fight "unemployment, the question of how we can become competitive and how we can create growth," Merkel said.
Click here for The Local's live election blog from Sunday night.