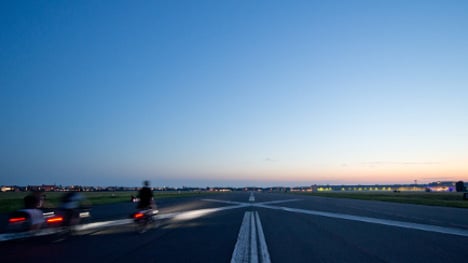 "It is in fact a defeat and a marked one at that," Mayor Wowereit (SPD) told regional broadcaster Inforadio RBB on Monday. "The citizens have decided that everything stays as it is. And that's what we'll do."

As Berlin citizens cast their ballots for the European parliamentary election, they also voted in a referendum aimed at preserving the green space, which is roughly the size of New York's Central Park.

According to early results, almost 65 percent voted against the development plans proposed by the city-state of Berlin, the local statistics office said.Tempelhof, measuring 300 hectares (750 acres), sits right in the middle of the German capital of 3.4 million.

"On Tempelhofer Feld it wasn't about the failure of a construction project, but about the future of this city," said Wowereit on Monday. "We have up to 50,000 new inhabitants every year, the vacant space is getting smaller all the time. Berliners want affordable housing – but obviously not on their own front doorstep."

The site echoes Berlin's turbulent and troubled history. On its northwestern edge looms the huge semi-circular former airport terminal, typical of the Nazis' architectural gigantism, built between 1936 and 1941.

GALLERY: Tempelhof Airport through the years Early in the Cold War, Tempelhof became the hub for the Berlin Airlift, when Allied planes made some 277,000 landings here to supply the western part of the war-ravaged city with food and fuel during the 1948-49 Soviet blockade.

Opened as a park in 2010, Tempelhof became a temple of outdoor recreation. In summer the open sky is filled with kites, and people run, skate and cycle on the old runways, or simply sunbathe or enjoy a barbecue in the grass.
The city had proposed building some 4,700 apartments, homes and commercial spaces, as well as a large public library, sports fields and a lake, that between them would cover about 20 percent of the field.
A citizens' initiative called "100 percent Tempelhofer Feld" sprang up in nearby neighbourhoods. They collected more than 185,000 signatures, about 10,000 more than required, to launch Sunday's referendum.
SEE ALSO: Berlin's ghost airport vote approaches