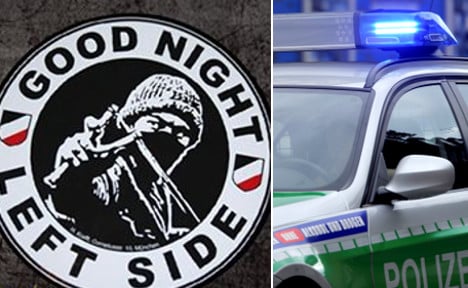 One of the stickers place in the Bavarian police van. Photo: Facebook/DPA

An unnamed passer-by on their way to a football match on Sunday in Fürth was shocked to find several far-right stickers stuck on a box in the trunk of a USK police car – a special unit used for crowd control.

Zeit Online on its far-right watch blog, Störungsmelder, wrote on Thursday that the passer-by took a photo which then opened the police force up to a host of criticism.

The stickers, which were clearly visible through the rear window, were printed with well known far-right slogans advocating violence against anti-fascists. "Good Night Left Side" and "Organize against Antifa. Know your enemy. Name your enemy," they read.

A further sticker stick said "No sex with ticks," a derogatory term used by the far right to refer to left-wing opponents.

Initial outrage from regional anti-Nazi campaigners prompted an internal inquiry by the police unit. Investigators were at first looking into at least ten police officers, but their search ended on Thursday when an unnamed 25-year-old came forward to claim responsibility.

The man told his superiors he had "acted thoughtlessly," Bamberg police said in a statement. By Thursday afternoon he had not yet spoken to the state prosecutor, which is currently looking into whether there are grounds for a criminal charge against him.

The stickers are thought to have been bought from "Final Resistance," an online shop selling far-right paraphernalia run by two known Bavarian neo-Nazis.

The incident has caused "serious damage" to the reputation of the Bavarian police force, spokesman Holger Baumbach told the Zeit Online blog, and promised consequences "ranging from a reprimand to a dismissal," for the culprit.

Bavarian Interior Minister Joachim Herrmann said publicly on Tuesday that he would not tolerate "any extremists in the Bavarian police force." Meanwhile, the Fürth police unit spokesman Herbert Gröschel previously told Bayerischer Rundfunk broadcaster that if they found the culprit, his "time in this unit would be over".

As a immediate measure he has been barred from policing crowds at demonstrations and football matches.