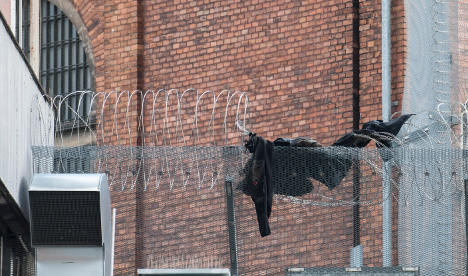 The blanket the prisoners used to pass the barbed wire fence was found by staff on Monday morning. Photo: DPA

Of the two escapees from Moabit prison, one is believed to be a man convicted of fraud, the other is thought to be one of two suspects in the robbing and murder of nightclub owner Joachim S., the Berliner Morgenpost newspaper reported.

A 33-year-old named as Metin M. and a 29-year-old, Marek F., were arrested last March for the killing of Joachim S., in which the 59-year-old victim was found with multiple stab wounds to the upper body, neck and head.

At a press conference on Monday afternoon, Berlin's Justice Senator Thomas Heilmann said the escape was a result of a series of unlikely accidents.

After managing to cut through their "old" bars, the inmates "athletically avoided obstacles we thought were impassable", Heilmann told reporters.

The escape effort was also helped by building work in the prison taking some electronic warning systems offline – and when the alarm was raised, authorities took it as a false alarm, Heilmann explained.

"If just one of these random faults had not come up, the escape attempt would never have been successful," he said.

He added the authorities were investigating if the faults at the prison were really random, or whether the escapees had had help, and said there would be a full independent inquiry into the escape.

Police are searching for the escapees, with officers deployed at all the capital's main railway stations and both airports.

Heilmann declined to give further details on the police search, saying authorities did not want to help the escapees.

Lisa Jani, spokesman for the city's justice administration, confirmed to The Local on Monday lunchtime the manhunt was very much underway.

Police are also collecting evidence at the scene of the escape. The two appear to have used a blanket to cushion the fence's barbed wire, allowing them to climb over.