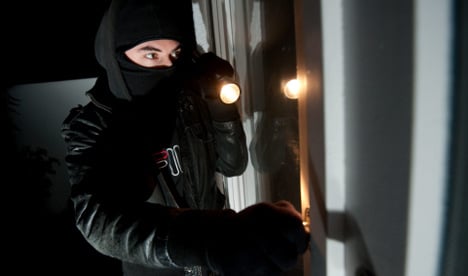 In 2012 the number of domestic burglaries rose by 8.7 percent to 144,117 – a break-in every four minutes. And the 2013 figures which will be published in June are expected to show a further increase.

The 2013 numbers have already been released for some of Germany’s 16 states. They show a huge rise in Baden-Württemberg, with the number of burglaries increasing by more than 30 percent, to 11,300 cases last year.

In North Rhine-Westphalia, there were 54,953 break-ins, an increase of 1.5 percent and the highest figure since 1995.

Police in North Rhine-Westphalia said in their report that “mobile gangs were increasingly identified as suspects".

They are trying to fight back with more road checks including on motorways.

He described the typical burglar as “young, male and addicted to drugs” and often burgling the home of someone they knew.

Feltes also said there were far more burglaries than recorded in the figures.

Despite crime levels falling overall in Germany, the number of burglaries has been increasing since 2005.

But some states reported good news. In Schleswig-Holstein the number of break-ins fell slightly, although daytime burglaries rose by nine percent.

In Bremen the number fell by 12 percent. Interior Senator Ulrich Mäurer (SPD) put the sharp decline down to more homeowners and tenants seeking advice on how to secure their homes.