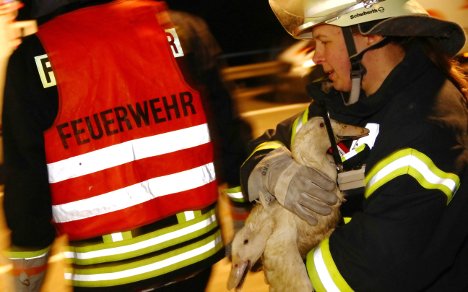 Some of the escaped ducks being caught on Tuesday night. Photo: DPA

Police said the lorry carrying 4,700 live ducks crashed at around 1.30 am on Wednesday on the A7 motorway near Bad Hersfeld in the central German state of Hesse.

It slammed into the central reservation, after losing control, tipped over sideways and burst into flames.

The driver and passenger, a 42-year-old from Coburg and a 55-year-old from Mansfeld, suffered minor injuries and were taken to Bad Hersfeld Hospital.

While a number of the ducks, which were reared for eating, did not survive the crash, many managed to escape, wreaking havoc on the road.

Traffic jams several kilometres long built up as police closed the road in both directions for several hours to give firemen the chance to rescue the surviving animals.

Click here to see photos of the rescue operation