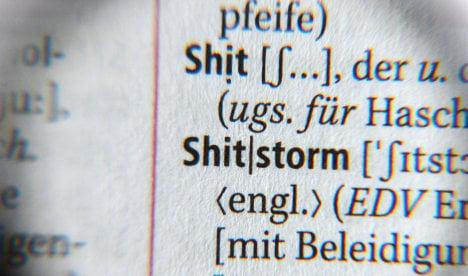 Since moving to Germany I have been hearing numerous complaints about the Anglicization of the local language and of the overuse of Englis(c)h words in German – the dreaded ‘Denglisch’.

Modern Germans (and even the not-so-modern ones) go shoppen (shopping as a past time, and not as tedious grocery shopping), they have TelCos (a conference call), they chat (message friends online), they email and they hold on to Jobs in which they are occasionally asked to brainstorm with their colleagues and meet deadlines.

They do a lot of cool things in Denglisch rather than in German.

The phenomenon of Germans using and adapting English words could be rooted in the German language itself, which often does not have quick work-arounds.

The short and oh-so-long of it

One need only compare Berlin’s public transport announcement of, ‘Bitte beachten Sie beim Aussteigen die Lücke zwischen Zug und Bahnsteigkante’ to the London Tube’s: ‘Mind the Gap!’. Only one of these ended up printed on T-shirts.

One of the most attractive things about English is how it produces catchy phrases. They may not be 100 percent precise, but they do get the message across. This creates a lively and bubbly language which is being adopted around the world.

Yet Denglisch is becoming an ever more contentious issue in Germany.

Despite that, ‘Länder Tickets’ are still selling well and railway stations continue to offer train times at ‘Information Points’.

Problem is in front of their noses

I think the problem is on the silver screen – both large and small. Although American and British television and cinema productions are abundant in Germany, they are all dubbed.

This leaves Germans far less exposed to English than people in Nordic countries or the Netherlands.

Living in a dubbed bliss, the average German never comes to care about such television classics as ‘Are You Being Served?’ with its pun-driven humour. They never delight in recognizing Miss Piggy notes in Master Jedi Yoda’s voice.

The problem is that while cocooned within the German-filtered world, Germans can live most of their lives without hearing actual English, and may well end up thinking that Denglisch is accurate.

And why should they think otherwise? The media bombards the public with a mélange of Denglisch-German, spicing up dubbed German dialogue with phrases like ‘spass weekends’, ‘travel angebot’, ‘fashion und style’ and the occasional offer of a ‘welcome-drink’.

A hybrid with no rules

This creates a hybrid language which does not adhere to the grammar rules of either German or English, while simultaneously denying exposure to the true sense of a foreign culture – its language.

Yet if the German media constantly uses it, why should people not get a few linguistic kicks from a bit of Denglisch?

Why should they not come to think that a Showmaster is the English term for a show host, and an Oldtimer a valid nickname for a classic car?

If those words are never heard in a real English context, a German speaker can never realize that a Showmaster in English hints at a person far more ill-natured than a show host, and an Oldtimer means an old or experienced person rather than an automobile.

It is high time the Germans take a cue from the Scandinavians and keep original language in the cinema and on the telly. This would help to keep the German language German and English, well… let's leave that problem to those at the helm of the Oxford English Dictionary.

Have you got something you want to let off steam about? Email [email protected] to take part in Reader Rants.