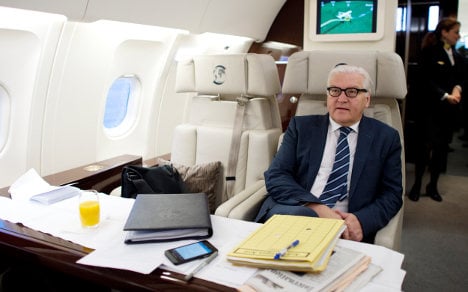 Steinmeier sets off for Ukraine on Tuesday. Photo: DPA

Foreign Minister Frank-Walter Steinmeier left Berlin for Ukraine on Tuesday to support a "national dialogue" between Kiev and the pro-Russian regions in the east, said his spokesman in Berlin.

It is the latest initiative by Berlin's top diplomat, who has engaged in months of whirlwind diplomacy amid the crisis, while Chancellor Angela Merkel has made repeated phone calls to President Vladimir Putin.

Steinmeier will travel both to Kiev and the pro-Russian east of the country, a day before he heads to join a cabinet meeting in Paris to discuss the Ukraine crisis with Germany's close European partner.

The trip aims to support a national "round table" under the auspices of the Organisation for Security and Cooperation (OSCE) ahead of May 25th presidential elections, said Steinmeier's spokesman Martin Schäfer.

Despite making lengthy comments at a press conference, Schäfer did not mention what was the topic of the day at an EU meeting in Brussels: sanctions against Moscow to punish Putin for stoking the conflict.

Germany's Secretary of State for European Affairs, Michael Roth, in comments published on Monday, said that "economic sanctions alone, no matter how tough, do not necessarily lead to the outcome we desire".

Berlin has pushed for a solution for over a week that would be more "European" than any possible "Geneva II" conference that would involve the United States, noted a European diplomat in Berlin.

One of the co-moderators in the round table will be a German, Wolfgang Ischinger, a career diplomat who now chairs the annual Munich Security Conference of defence, diplomacy and intelligence figures.

He took part in the Dayton negotiations on Bosnia as well as NATO's eastward enlargement.

Berlin will therefore have a direct line to the Ukraine discussions, after having already been tightly involved in behind-the-scenes efforts.

Steinmeier dashed to Vienna last Tuesday to brief the OSCE chief, Swiss President Didier Burkhalter, who later met Putin in Moscow, according to a source familiar with the matter. "Germany has a very cautious approach," said Jörg Froebig of the Berlin office of the German Marshall Fund, a research centre.

He noted that Steinmeier's centre-left Social Democratic Party (SPD) had for decades pursued the "Ostpolitik" of opening to the communist East during the times of the Iron Curtain.

"The SPD rank-and-file always had this 'special relationship' with Russia," he said.

The SPD's former German chancellor Gerhard Schröder, who has tended to speak freely since leaving office, said aloud what many German officials only whisper.

"The fundamental error comes from the EU policy in favour of a treaty of association" with Ukraine, Schröder said.

"The EU ignored that Ukraine is a culturally deeply divided country."

Many in Germany, a country split in two during the Cold War, have linguistic and cultural ties with Eastern Europe and Russia, while German business is heavily engaged in the region.

The European diplomat said "public opinion in Germany is interested in Ukraine, much more than in other countries. This also explains why Berlin appears to be most on the case."

Liana Fix, of the German Council on Foreign Relations, said Merkel had to steer a fine line regarding the Ukraine conflict.

"With a public opinion afraid of war, as polls show, a business lobby which want to work with Russia, and while trying to keep the EU together, it's a balancing act for Merkel," she said.

Stefan Meister, of the European Council on Foreign Relations, said Berlin's moderate approach was actually in line with what its European allies wanted.

"The Baltic states and Poland are making noise, for geographical as well as historical reasons," he said, "but most member states support a more cooperative approach."