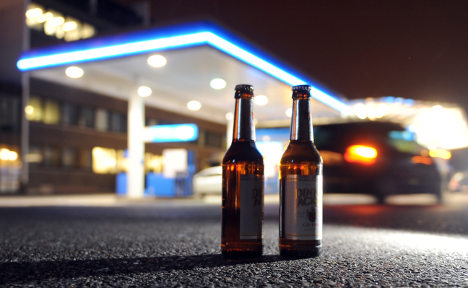 The scheme will use beer, alongside a hot meal and medical care, as an incentive for people to take part. Photo: DPA

The "Pick-up" initiative, planned by charity Addict Support Essen to start in mid-June, offers addicts beer – along with food and medical treatment – in exchange for working three to six hours a day collecting litter off streets.

They will also get "pocket money" of €1.25 per hour, similar to the established "one-euro-jobs" which employ unemployed and homeless people in Germany for public projects at an hourly rate of €1.

No beer, no show

"Pick-up" will be totally voluntary and targeted at Essen's long-term alcoholics, many of whom also have drug problems and have spent time in prison, the charity said in a statement.

"The aim of the programme is not to supply people with beer," it explained. "For the participants it is about a meaningful daily structure, feeling useful and learning a new way to behave."

The statement claimed offering people beer was a small part of the project, merely a means to an end.

Addict Support spokesman Bärbel Marrziniak told broadcaster ZDF: "Some of them simply need the bottle of beer to become fit for work.

"If we didn't give it to them, they would not turn up in the first place."

And organizers defended plans to use free booze to entice alcoholics into work by saying that for many long-term drinkers abstinence is an unrealistic goal.

If the promise of free beer motivates addicts to work, regain a daily routine and accept medical care, they said, it is worthwhile.

Addict Support Essen also argued it was right and proper the project be paid for out of public funds.

"It is the same with funding for most social programmes for disadvantaged and sick people in Germany," it said in the statement. "It ends up saving money in other areas."

But some condemned the plans as irresponsible and exploitative.

"It would be nice if we could give the homeless a bit of their dignity back, when they're already at rock bottom," Sabine Zschaler, chairman of charity Homeless Support Ruhr and Lower Rhine, told ZDF.

"But that's not going to happen if we pay them with beer."

Zschaler said she suspected many participants would turn up, do the minimum required to get their bottle of beer, and then leave.

But Addict Support Essen is confident the tactic will produce results, pointing to a similar scheme in Amsterdam which they said was highly successful.

"Pick up" claims it will make a difference by educating participants on a controlled approach to drinking, alongside giving medical support including immunizations, medicines, vitamin supplements and counseling.

The scheme's one-year trial is slated to kick off in Essen in mid-June, with a medical observer assigned to evaluate its effects among participants.

"What will come about at the end of that, we don't yet know ourselves," Marrziniak said.