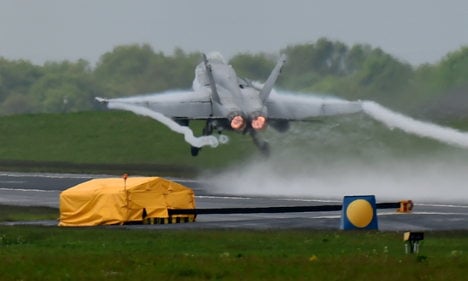 But the exercise is nothing to do with increased tensions between Europe and Russia over the situation in Ukraine, the Luftwaffe told The Local.

"This has been in planning for two years," a Luftwaffe spokesman said. "For it to have anything to do with Ukraine would have required a great degree of clairvoyance."

The Joint Air Warfare Tactical Exercise – known as JAWTEX 2014 – aims to practice the tactical integration of all forces – airforce, army and marines from the 11 countries.

Nearly 4,200 soldiers are taking part in the exercise, with more than 800 from other countries, including Holland, Italy, France, Finland, Slovenia, Greece, Austria, Switzerland, Turkey, Hungary and the USA.

Check out our gallery of pictures here

The involvement of soldiers from so many different countries – Nato members and non-Nato members – means that the working language for the exercise is English.

Aircraft being used during the 11-day exercise will include Finnish F18s, Turkish F16s, and Eurofighters from Germany and Italy, as well as Hungarian Gripens.

And although they will be flying over much of northern Germany – roughly anywhere north of Cologne – people living underneath will barely realize what is going on, the Luftwaffe spokesman promised.

SEE ALSO: Why Germany should stop arming the world