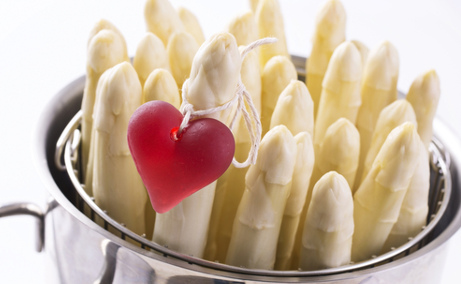 But it's not only Germans that hold the vegetable with great reverence. Asparagus has been hailed as a miracle vegetable since ancient times. The Local reveals ten odd aspara-facts.

1) Apparently eating asparagus, before and after drinking alcohol can have beneficial effects.

If you're planning a night out on the tiles, eating the vegetable before you start drinking could help protect your liver. The minerals and amino acids it contains not only protect the liver from toxins, the enzymes in asparagus can help break down the alcohol and alleviate hangovers.

2) Asparagus has been used as a medicine since ancient times. The earliest depiction of the vegetable was found on an Egyptian frieze dating back to 3,000 BC. Doctors and dentists were scarce in Ancient Greece, but the Greeks believed asparagus cured a number of ailments from toothache to heart disease.

3) Another health benefit – asparagus is also supposedly great for your sex-life. For centuries it has been regarded as a powerful aphrodisiac. Aside from its phallic shape, asparagus stirs up desire in both men and women. This is due to the large amounts of vitamin E present which stimulates the production of sex hormones.

4) If you're planning on conceiving, asparagus is your vegetable. Asparagus is a source of high-quality vitamin C, which keeps sperm healthy, as well as increasing its volume and mobility.

5) Is there any end to this vegetable's talents? Not only is asparagus packed with nutrients and vitamins, it is rich in antioxidants, which means it can help fight the aging process.

6) Peru is the world's leading asparagus exporter, however the Peruvians seldom consume their own produce – 99% of the produce is exported across the world both fresh and processed. In 2013, asparagus covered the largest cultivation area of any vegetable being grown in Germany.

7) Asparagus has a short shelf-life and only very young asparagus is eaten. Once the buds start to open the asparagus becomes woody and unpalatable, which explains why the Spargel-eating season is so short. Beginning in mid-April, the fun abruptly stops on June 24th in Germany. According to tradition the springtime vegetable, disappears in the fires of St. John the Baptist's day (June 24th) – the first heat of summer.

8) The effect of asparagus on urine odour is well-known. “Asparagus pee” has a strong and distinct smell. But the majority of people cannot smell it. According to scientists, it takes a special gene to detect the smell, of which only 25 percent of the population have.

9) White asparagus is in fact the same as green asparagus but grown underground. German farmers plant their asparagus under mounds of soil called hillings. Deprived of sunlight which prevents the development of chlorophyll (the green pigment in plants), the spears stay white.

10) And last but not least, asparagus contains absolutely no fat or cholesterol – so perfect if you're trying to lose weight for the summer.

How to eat asparagus the German way

The most traditional way to eat fresh white asparagus is to boil it and serve with a butter or hollandaise sauce poured over the top. It is often eaten with boiled new potatoes and some slices of black forest ham. Delicious.