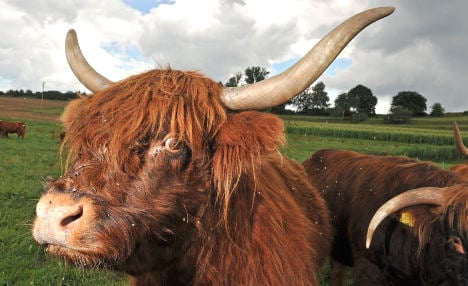 The escaped bull (not pictured) trashed a butcher's shop and broke a window before it was shot dead. Photo: DPA

The two-year-old bull was being led from a trailer into a slaughter house when he bolted, broke through a fence and escaped into the town, the Westdeutsche Allgemeine Zeitung (WAZ) reported on Wednesday.

But the bull panicked when he saw his own reflection in the butcher's shop window and leapt straight through the glass, before ploughing up and down the store. Tired of being a bull in a butcher’s shop he then jumped back out onto the street.

Knowing the steaks were high, with the crowded main street full of innocent bürger only nearby, butcher Stefan Gierse forgot about his ruined window long enough to grab a nail gun and he shot the crazed animal dead in front of the shop.

Vet Thomas Delker, who was called to inspect the animal on Tuesday, told the WAZ on Wednesday he thought the whole affair had been very well done.

“The butcher deserves a medal,” he said. “It's really lucky it went the way it did, something terrible could have happened there.”

Having killed the bull and loath to waste a perfectly good carcass, Gierse proceeded to bleed the animal out on the road, beheaded it and butchered it for meat.

Inspecting the butchered bull, Delker cleared it for human consumption.

“The meat is completely fine and can be used,” a spokesman for the town’s health authorities told The Local on Wednesday.