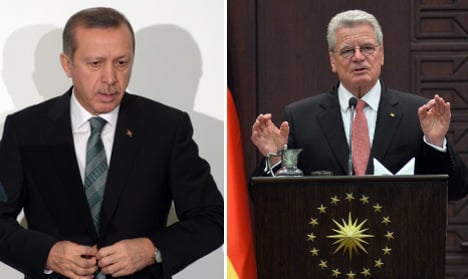 President Gauck is on a four-day visit to Turkey but his comments have upset the country's leader. Photo: DPA

"I think he still thinks of himself as pastor," Erdogan told parliament, a day after he met with German President Joachim Gauck who is on a four-day visit to Turkey.

Gauck, an outspoken former Lutheran pastor, gave a harsh indictment of recent actions by the Turkish government during speeches in Ankara on Monday – particularly efforts to ban Twitter and YouTube and increase control over the judiciary in response to protests and a corruption scandal.
"I must confess that these developments are scaring me," Gauck said in a speech at the Middle East Technical University. He added that the rule of law was in danger from efforts to muzzle the opposition.
"I ask myself if judicial independence is still guaranteed if the government purges so many prosecutors and police, and prevents them from shedding light on crooked developments… or manipulates decisions in its favour," Gauck said during his four-day visit to the country.
But Erdogan said Gauck's approach "upset" him.
"We have no hesitation, or fear. We can never tolerate interference in our domestic affairs," he told parliament.
SEE ALSO: CDU candidate forced to remove Turkish logo