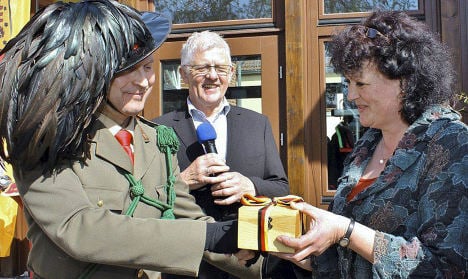 Johannes Templiner’s identity tag was discovered at the remains of a burial cross by a battlefield researcher in the Italian Dolomites in 2006. And researcher Joris Dell’Asin has now tracked down the soldier’s German descendants to tell them about his find.

Dell’Asin travelled to Nassenheide in Brandenburg two weeks ago to hand over the identity tag.

Templiner was a young carpenter before he enlisted, his 77-year-old great-niece told reporters on being handed his tag.

“It was a very emotional moment” said Manfred Telm, the supervisor of the department of planning in Nassenheide.

Spurred on by the discovery, the 57-year old travelled to Clauzetto, the Italian village where the researcher found Templiner’s identification. “He not only found his identification tag, he also found cutlery too”, said Telm. And the discovery has led to further searches in the area.

Since returning from Clauzetto, Telm has set up a project for trainees and schoolchildren in Nassenheide.

They have examined parish registers and death certificates, and searched for commemorative stones for victims of World War I at an old war memorial site.

“We found between 42 and 46 commemorative stones”, Telm said. “The project has given history a face.” The results of their research will be documented in photos, wall charts, a chronicle and a survey map.

The project has also garnered attention from further afield. Impressed with their findings, the German Federal Agency for Political Education has offered to sponsor the project, and the Braunschweig state museum wants to take over the project.

“It fits in well with our concept of how memorials can be created educationally,” explained a spokeswoman.