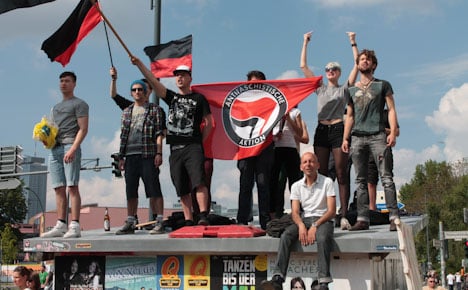 The far-right National Democratic Party (NPD) still called their brief march into Kreuzberg a "success," but opted to cancel a second rally planned for Thursday May 1st in Berlin’s Neukölln.

NPD organizers said on Saturday that they wanted to protest “against multiculturalism, and for a clean, orderly and German Kreuzberg.”

More than 1,600 riot police were on hand to protect them from anti-fascist activists who had gathered along the proposed route. Police estimates put the number of counter-demonstrators at 2,700, while organizers said the number of protesters was 5,000.

“We’re here so the Nazis can’t march through,” Fenja, an activist sitting with friends on Moritzplatz told The Local.

“The refugees on Oranienplatz can’t defend themselves from this assault. We’re here to show our solidarity,” she said, referring to a group of hunger strikers who had set up on the site of a former improvised refugee camp.

Berlin police spokesman Thomas Neuendorf said officers wanted to protect the rights of the marchers and prevent clashes, but would likely be unable to dislodge the counter-demonstrators.

“The goal is of course to protect their assembly rights. That means [the NPD] have a right to march along the route they registered,” he said. “But it is very difficult to clear away one thousand people.”

Hakan Tas, a member of the Berlin City Senate who was on site representing the Left party, thought police actions were one-sided.

“When these protests are allowed then counter-demonstrations must also be allowed as well, and the police must not act only against the left-wing protesters,” he said.

“If these [extreme right] demonstrations lead to escalation then they should no longer be allowed,” he added, pointing out that the constitutional right to freedom of assembly would not apply if the party were outlawed. An legal initiative to ban the NPD is currently underway, but has questionable chances of success. Completely surrounded by riot-police, press photographers and demonstrators, who shouted slogans from all sides, about one hundred NPD members arrived on Jannowitzbrücke around noon. They lingered around for well over an hour before organizers handed out German flags and signs with slogans like “money for grandma, not for Sinti and Roma.”

A loudspeaker mounted on a van blared out Nazi marching songs, which clashed with the punk music being played by counter-demonstrators and the constant din of barking police dogs.

Speeches followed shortly after, painting a picture of a Germany increasingly overrun with foreigners and criminality.

“People are becoming victims of these anti-social, multicultural and refugee policies. [Refugee claimants] must in 99 percent of cases be sent back to their home countries,” said Sebastian Schmidtke, leader of the capital’s NPD section.

A speaker introduced as “comrade Christoph from Dortmund” was even more inflammatory.

“In the year 2040, the German people will have died out,” he warned, ending his speech with the slogan ‘Germany for the Germans, foreigners out!’”

Moments later, Christoph was taken to a police van and charged with incitement.

About three hours after they first assembled, the marchers lined up behind a banner, and slowly walked the short distance into Kreuzberg. While police managed to hold most counter-demonstrators further back, wild screams of “Nazis out!” still carried through the air.

After about twenty minutes, and within sight of their starting point, the group came to a stop. Berlin NPD chief Schmidtke announced that police were “no longer able to guarantee our security”.

Despite all the disruptions, Schmidtke still regarded the demonstration as a success.

“The measure of success is not how far we walked, but how many people showed up. The success is in the fact that we have communicated our themes to the press,” he told The Local.

He denied that the march was meant to provoke left-wing activists who inhabit the area.

“It’s not provocative. If this is a lawless area where we can’t demonstrate then there is something wrong with the city,” he said.