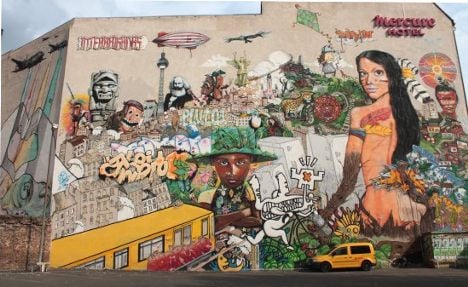 Murals, graffiti and other semi-legal creations scream out wherever you walk in the Berlin. Some are gargantuan multistorey landmarks that can't be missed, while others lay hidden in doorways or back alleys.

Kreuzberg, the gentrifying hipster capital of the city, is home to works by Italian artist Blu and ROA from Belgium. Some of the best examples are within walking distance of Schlessiches Tor, including the enormous "Brothers," which towers over a squatters' camp by the Spree river.

A little further, in an empty lot on Oranienstrasse, a macabre scene of dead animals hanging from threads is sure to shock.  Keep walking to Mariannenstrasse to get a glimpse of "Astronaut" by Victor Ash, which can also be seen from the U1 train between Kotbusser Tor and Görlitzer Bahnhof. Apart from its monumental Stalinist architecture, one of Friedrichshain's claims to fame is the RAW gallery on Revaler Straße. Graffiti covers nearly every square inch of this sprawling network of abandoned factories. Perhaps the most striking work is "Man overcome by insects" by Argentinian artist Alaniz, which uses the surrounding architecture to emphasize its own form.

There is plenty to be found in Mitte as well, especially around Alexanderplatz. There's even a few of Banksy's works hidden here and there… if you can get to them before they're covered over or stolen.