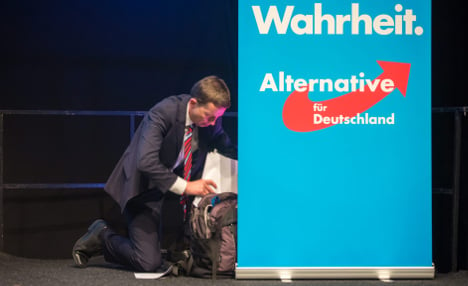 Andreas Hofer, who goes by the pseudonym of a Tyrolean Freedom fighter, told the Frankfurter Allgemeine Zeitung that he and his small group have informants throughout the party, including people with access to its executive board.

Calling themselves "Résistance in der AfD," the group published critical articles about the party and its leadership on a website called Alternativer AfD Newsletter, which they founded in April 2013. They used their contacts to secure internal party documents like membership lists, internal memos and accounting statements.

Hofer told the Frankfurter Allgemeine Zeitung that he formed the group and website because he feared that the party was bringing dangerous ideas into the mainstream.

"I am doing nothing wrong, I am merely fighting Nazis," he told the paper.

Alternative AfD Newsletter has also published numerous resignation letters of prominent party officials, some of which harshly criticize the leadership and the rightward turn of the party.

The website's posts are allegedly followed by over 100 newspapers and four wire services, and even by high ranking members of the AfD who hope to react to compromising leaks as quickly as possible.

But a spokesman for the AfD told The Local on Friday the website spread "false claims and misleading messages".

In order to conceal his identity, Hofer travelled outside of Germany and logged onto unsecured wireless networks whenever he needed to use e-mail. He frequently changed his phone number and chip card, always paying in cash, the Frankfurter Allgemeine Zeitung reported.

But on Thursday the party sent out an e-mail to its membership claiming that the infiltrator had been identified with the help of an IT security company.

"The AfD will now look into further steps that can be taken under the law… many AfD members have already filed charges," the e-mail said.

The AfD spokesman told The Local the mole had been caught by police and he was facing charges of slander.

He added that the man was no longer a member of the party.

SEE ALSO: Interview with the AfD on party's election hopes