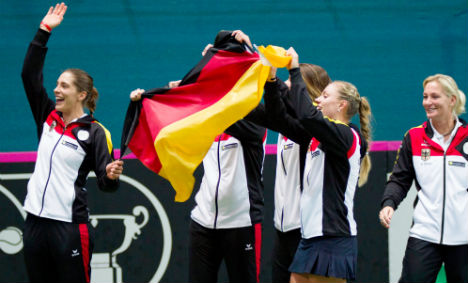 Members of the German Fed Cup Team celebrate after an earlier victory in the tournament. Photo: DPA

Andrea Petkovic downed Australia's number one and former US Open champion Samantha Stosur 6-1, 7-6 (9-7) in 101 minutes in the first singles match.

World number seven Angelique Kerber then only dropped one game in disposing of Australia's number two Casey Dellacqua in just 50 minutes to seize control
of the tie.

Germany need only one more victory from Sunday's two reverse singles and the doubles to reach their first Fed Cup final since 1992 when Steffi Graf and Anke Huber starred in the team which defeated Spain.

"I saw two great matches and I was very proud of the performance of my two girls," German captain Barbara Rittner said.

"There are still three points to go and tomorrow is a new day. I think the matches were closer than they look. It was one of those days when Angie played a perfect match against Casey."

World number 19 Stosur had hoped to provide a confident start for Australia after inspiring an upset over Germany the last time they met in Stuttgart in 2012.

Instead, Stosur added to her underwhelming 2014 form. Stosur has made it past the third round at only one tournament this year, and again appeared to buckle early under the weight of expectation on a home court.

While world number 28 Petkovic claimed her opponent faced a "tougher mental state" than her under the local spotlight, Stosur denied she succumbed to pressure.

"I wasn't overly nervous. I thought she came out hitting the ball very clean and deep — that puts you on the back foot," she said.

"At least I was able to fight back. But at the end of the day that doesn't really count for much."

Australia, aiming to make their first Fed Cup final in 21 years and break a 40-year title drought, are now fighting to stay alive ahead of Sunday's final three matches.

"I was quietly confident our worst result would be 1-1 today," Australian captain Alicia Molik said.

"But I truly believe we will be better tomorrow because of today as we don't have anything to lose."

Molik pointed to Stosur's 2-0 record against Kerber and backed world number 53 Dellacqua to bounce back against Petkovic.

Australia and Germany are meeting for the 13th time with the Australians currently holding an 8-4 advantage.