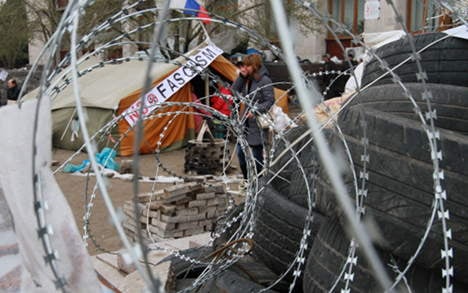 Gabriel – at an event commemorating World War I with French Prime Minister Manuel Valls – warned of resurgent nationalist forces both within Europe and "in its neighbourhood".

He said that good news several months ago from Ukraine – including an end to bloody violence against protesters – had since given way to "an ongoing military confrontation" and the realization that "Russia is apparently willing to let tanks cross European borders."

"Suddenly, we are being dragged from the observer's position into a long smouldering and incendiary conflict, which is also demanding a price from Europe in the form of sanctions against Russia," he said.

Responsible foreign policy has to make sure that this is prevented,” he told Swiss newspaper the Neue Zürcher Zeitung.

“Whether this is achieved depends not only on us but also on what Russia has planned. Moscow needs to show whether it is ready to leave the route it put itself on by annexing Crimea,” Steinmeier added.

Christiane Wirtz, spokeswoman for Chancellor Angela Merkel said: "There are many signs that the armed groups active in eastern Ukraine are receiving support from Russia,” she said, adding that Merkel had discussed the crisis with British Prime Minister David Cameron by phone on Monday morning.

"A look at the appearance, uniforms and weaponry of some of these groups hardly suggests that they are defence forces spontaneously formed by civilians," she said.

“We therefore see Russia as having a particular responsibility to prevent a further escalation, and to contribute to stabilizing the situation in Ukraine.

"This includes withdrawing troops from the Ukrainian border, lowering gas prices and using moderate language. It must be clear that violence is not an option for resolving disputes, and this also goes for Russia."