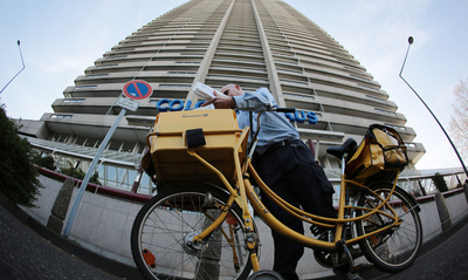 Jan Kothe begins his day's work. Photo: DPA
Every morning Jan Kothe has to sort through a pile of 800 envelopes labelled "Schanz 2, 50735 Cologne." This is no small challenge, considering there are 352 post boxes in the 41-storey apartment block.

But the postal worker has developed a special system. Before he sets off, he sorts the letters into eight bundles – one for every five storeys of the building.

Once he gets to Schanz 2, he transfers them into a supermarket trolley. Then he takes the lift, stopping every five storeys to leave a bundle on the ground. Once he reaches the top, he begins distributing the letters.

From then on, he takes the stairs. "There's no point taking the lift just one storey," he said.

Kothe then makes his way down the building. "It's nice and peaceful," he said. Every five storeys he picks up another bundle.

The 155 metre-high building is almost as tall as Cologne's famous Cathedral. But while residents enjoy spectacular views, the only glimpse of the city Kothe can catch is through a slit in the stairwell.

It reveals its uglier eastern side, which locals refer to as "Cologne's wrong side".

In the decade he has worked in the building, Kothe has never asked one of the residents if he could enter their apartment to take in the view. "I'm sure they wouldn't be too happy," he said.

The postal worker also believes it is important to be discreet in his encounters with residents.

Exchanges are limited to pleasantries inside the elevator. "It's along the lines of 'Well, is there a lot today?' But that's about it," he said. The postman has memorized the names of all the residents and keeps track of who subscribes to which publications. One of the problems he encounters is when residents within the building move apartment.

This apparently occurs quite frequently, since those on the lower levels are keen to move upwards.

Two women with identical names, one living on the 24th floor, the other on the 40th, also present a problem. But according to Kothe they swap post when he makes a mistake.

Despite the spectacular views, the sauna and swimming pool, Kothe has no wish himself to live at Schanz 2. "When it's stormy, the top storeys sway," he said.