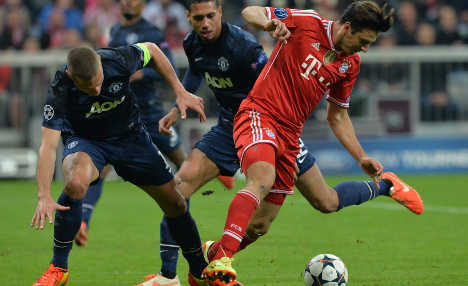 Champions Bayern romped to a 3-1 victory at home to United in Wednesday's quarter-final, second-leg to win the tie 4-2 on aggregate.

Thomas Müller tapped Bayern into the lead before Arjen Robben slotted the hosts third to knock Moyes' United out of the competition and keep the defending champions on course for the May 24 final in Lisbon.

"I thought the players did a great job tonight, the only crime was that we let them equalise after just a few seconds," admitted Moyes.

"I have a team of experienced players and something you learn as a school boy is to concentrate and do your job after the opponent scores.

"I'm pleased with the performance, but a couple of small errors cost us in the end.

"We had done fantastically well to contain them and mark them tightly, so it was so disappointing to concede so soon.

"We had contained them for long periods of time, but it wasn't to be.

"We had a great chance at 2-1 down to make it 2-2 and we created more opportunities to score than we did in the first leg."

With United seventh in the Premier League and also out of the FA Cup, Moyes said he has seen signs of improvement in United's ranks as they rebuild after Sir Alex Ferguson's departure last season.

"We have improved in games, the work of rebuilding is happening, we are getting to where we want to be and improving," said the Scot.

"I thought there was a lot of positives to take from tonight." Patrice scored a wonder goal, it would have been great if we could have held onto that 1-0 lead."

Moyes admitted England striker Wayne Rooney had an off-evening in Munich having played with a pain-killing injection for a badly bruised toe.

"I felt there was a concern, he hadn't trained all week and played with an injection, he just didn't quite take his chances," said Moyes.

Bayern on the verge of their fourth Champions League final in five years and having already wrapped up the Bundesliga title, the Bavarian giants have made no secret of their desire to become the first team to defend the title.

"I knew it would be tough," said Bayern coach Pep Guardiola. "It was a Champions League quarter-final and Manchester had the goalie and eight players in the penalty area for most of the match. But we were patient and had some luck with our final touches."

Goal-scorer Robben admitted there was plenty of room for improvement over the two legs. "The first ten minutes after the break were a catastrophe for us up until they took the lead," he said.

"It was important that we got the equalizer quickly, now we have just one more opponent before the Lisbon final."