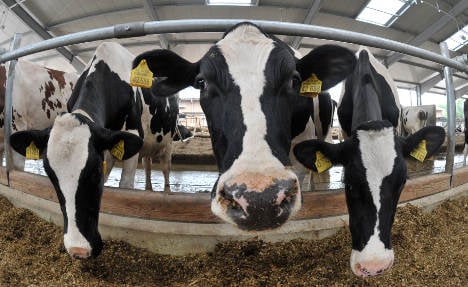 The seven dairy cows stolen in the night raid would have given birth to calves in four to six weeks Photo: DPA

Rustlers forced their way into the stall last Tuesday night and unchained seven of the 34 cows inside, police said. They then led them out into at least one vehicle before escaping unnoticed.

A police spokesman in Stade, the town north-west of Hamburg where the farm is situated, told The Local they investigated up to ten cattle thefts a year – but a night-time raid this large is very unusual.

"It's always cows getting stolen from the pasture, not from the stalls.

"And in most cases it's just one animal – as a rule, seven cows don't just get stolen in one go," he added.

"I can't remember anything like this happening once in the last ten years."

The cows' owner, 54-year-old farmer Detlef Cordes, told regional newspaper the Hamburger Morgenpost the cows would have stood out from the others as they were all heavily pregnant.

"The babies would have arrived in the next four to six weeks," he said.

He added that "the animals know to cooperate when someone brings them out and leads them into a transport".

Although his insurance will pay for the damages, Cordes told the Morgenpost the loss was still a major blow, as he relied on each of his animals.

The loss of the seven cows means Cordes' farm, which keeps around 300 animals, is now producing around 200 fewer litres of milk a day.

The rustlers' intended use of the livestock is unknown, but the cows were officially registered and tagged. Their registration documents were not stolen with them.

This means the thieves will not be able to have the animals slaughtered via official channels.

Police told The Local, "We don't know where they are being kept, whether they have already ended up abroad, or if they are somewhere else in Germany."

But the Morgenpost reported police had suggested to Cordes his cows might already have been taken to eastern Europe.

Police told The Local they have no leads so far, either on the location of the stolen livestock or the identities of the rustlers.