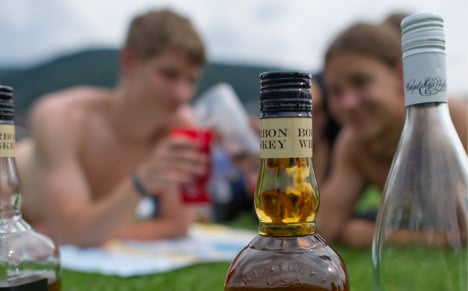 The report shows almost half of young people in Germany are drinking to excess at least once a month. Photo: DPA

The study from the government's drugs commissioner, which surveyed the alcohol consumption habits of 5,000 young people in 2012, showed 44 percent of 18 to 25 year olds drinking heavily at least once a month.

It also found 17 percent of 12-17-year-olds drank to excess every month.

Drugs commissioner Marlene Mortler said the widespread overuse of alcohol among young people represented a "substantial health risk," highlighting that in the past year over 26,000 young people had had to be treated in German hospitals for alcohol poisoning.

"It is time we had a society-wide rethink towards more responsible consumption of alcohol,” she said.

"More and more 12-17-year-olds are going without alcohol altogether,” she said. “Thirty percent said they had never drank alcohol in their lives." Ten years ago that figure was just 13 percent.

But the overall upward trend in frequency and amount of youth drinking shows no sign of turning around.

The study found 32 percent of over-16s drinking alcohol at least once a week and consumption of dangerously high amounts remains just as common as in 2010, according to Pott.

Since 2009 the BZgA have worked together with the Society of Private Health Insurers (PKV) on a prevention campaign called "Alcohol? Know your Limit."

"It was always clear to us that it would take time to change attitudes to alcohol in society,” he said.

"That's why the private insurers will continue supporting the "Know your Limit" campaign in the coming years."

Meanwhile the BZgA said it would be putting more emphasis on its prevention efforts in schools with ploys such as a new educational DVD.