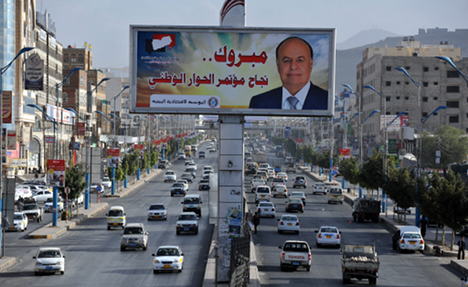 Vehicles drive under a billboard showing a picture of Yemeni President Abdo Rabbo Mansour Hadi at a street in Sanaa, Yemen, in February 2014. Photo: DPA

Wearing dark glasses and a white robe traditional on the Arab peninsula, the man identified as Rudiger Schwidt appeared to have lost weight and, according to a reporter, is suffering from lung cancer and needs urgent treatment,

In the short video, shown in the evening, the hostage, in his 60s, appeared with a kidnapper who wielded a Kalashnikov rifle. They were seen outside the garage of a house under construction.

Schwidt was kidnapped in Sanaa in late January by a tribesman pressing authorities to release his two detained sons, according to a foreign ministry official.

The Al-Yemen Al-Youm channel cited the hostage-taker named as Ali Harijiwan as saying he had threatened to "sell the hostage to Al-Qaeda" and also demanded $5 million.

A source close to the kidnapper told AFP that the hostage's health was deteriorating and he required cancer treatment unavailable in Yemen.

Hundreds of people have been kidnapped in Yemen over the past 15 years, mostly by tribesmen who use them as bargaining chips in disputes with the government. Nearly all have later been freed unharmed.

Al-Qaeda militants have also seized foreigners in the country, but such incidents are rare.