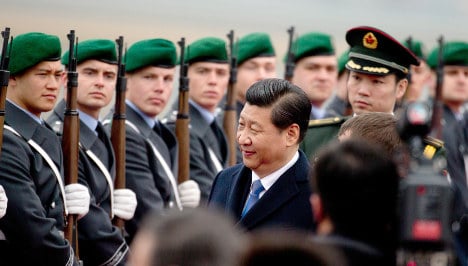 Under grey skies, Xi, accompanied by his singer wife Peng Liyuan, was greeted with military honours by his counterpart Joachim Gauck, a former East German rights activist, in the grounds of the presidential palace.

Outside, about 50 pro-Tibet campaigners staged a peaceful protest.
Xi is due to hold talks with Chancellor Angela Merkel during his first visit to Europe's top economy since taking office a year ago, and which comes the week before Berlin hosts a major exhibition by dissident Chinese artist Ai Weiwei.
Germany is China's biggest EU trading partner, while the Asian giant is a massive market for German machines, technology and cars.
Hans Kundnani, of the European Council on Foreign Relations, said the visit was largely aimed at "relationship-building" with Xi and China's new leaders.
"The economic relationship, in particular the massive growth of German exports to China in the last decades, is the basis for their increasingly close political relationship," he told AFP.
Strong cooperation between China and Germany also benefits global political stability, Xi wrote in Friday's Frankfurter Allgemeine Zeitung daily.
"An intensification of cooperation with Germany by China… will be equally of use for the development of a multi-polar world as for ensuring and advancing peace, stability and prosperity in the world," he wrote.
Gauck welcomed economic reforms announced by Beijing's new leadership and urged China to continue its push towards more liberal markets and a system of justice "in which nobody is to stand above the law".
He also indirectly addressed human rights, saying reforms could help balance different interests, including between religious communities.
"The alternative to that would be discord, conflict and violence", he said in a speech attended by Xi.
Last year German-Chinese trade hit $161.5 billion, according to the newly-established Chinese Chamber of Trade in Germany.
After a clutch of multi-billion-dollar business deals were inked during Xi's last stop in France, German luxury automaker Daimler is planning to sign a cooperation deal with Chinese partner Beijing Automotive worth around one billion euros, DPA news agency reported.
Eberhard Sandschneider of the German Council on Foreign Relations think-tank said a key part of the trip would be about forging ahead with the Chinese-German trade relationship.
"It's clear that the economy plays a central role even if there aren't a lot of announcements in terms of contracts," he said.
The eurozone's first centre for Chinese yuan trades could even be opened in Germany's financial capital, Frankfurt, according to Handelsblatt business daily.

'A window is opening'

With all eyes fixed on Russia's possible next move over Ukraine, the worst stand-off since the Cold War is also expected to loom large in Merkel's talks with Xi later Friday.
Xi's four-country European tour began after China lodged a rare abstention on a Western backed UN Security Council resolution condemning Crimea's referendum on joining Russia, rather than vetoing it alongside its ally Moscow.
Sebastian Heilmann, director of the Mercator Institute for China Studies, said Merkel could try to urge Xi for Beijing to take on a "moderating position" in the crisis.
With its own separatist concerns in Tibet and Xinjiang, he said Beijing cannot have liked the direction Russia has taken with its annexation of Crimea and noted its new leadership wanted to position China as an active and responsible major world power.
"For the West a window is therefore opening to solicit China's cooperation," he said.
The largest-ever exhibition of Chinese artist Ai Weiwei opens April 3rd in Berlin, but the outspoken artist is unable to attend as his passport was confiscated by Beijing in 2011 after a nearly three-month detention.
Speculation that Xi would visit the Holocaust Memorial in Berlin to highlight how Germany has confronted its Nazi past as a way to chasten Japan over postwar atonement was denied by Beijing.
SEE ALSO: Merkel hopes Russia sanctions are enough