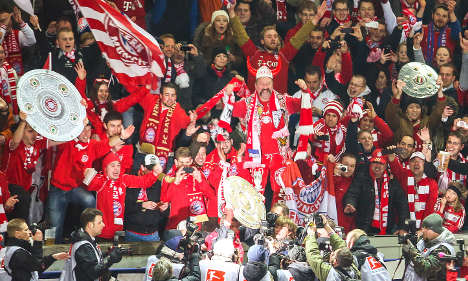 Bayern claimed the title with a 3-1 win at Hertha Berlin.

The Bavarian giants broke their own record for the earliest confirmed league title win, set last April under Jupp Heynckes en route to the treble of European, league and cup titles, by one match.

"We won the title with hard work and when you see what Jupp Heynckes achieved last season, that was the only way we were going to better that," said Guardiola. "He laid the foundations."

Bayern star Thiago Alcantara posted this photo of the post-match celebrations on Twitter.

"Obviously I'm delighted that we have retained the title," said Guardiola as his side opened up an unassailable 25-point lead over second-placed Borussia Dortmund.

"I want to thank my players and the club who have helped me achieve this. We had a lot of injuries in recent months and we have not always played well, but my players showed character.

"Tonight we were very active from the start, but in the second half we lost a little of our control. I am just happy we have finally managed it. It didn't matter when we got it just as long as we won the title for this great club. We'll celebrate today and tomorrow."

They are still on course to become the first side to finish a Bundesliga season unbeaten.

"It's unbelievable to clinch the title on the back of an unbeaten record," said winger Arjen Robben. "We're all unbelievably proud of the team and our achievements this season."

Midfielder Toni Kroos slammed home an early strike before Mario Götze headed their second as Bayern went 2-0 up after 14 minutes.

It is now mathematically certain that Bayern cannot be caught by their rivals, although in truth the title race has been over for weeks.

Germany midfielder Bastian Schweinsteiger, who has won the Bundesliga title for the seventh time in his career, said the players would party long into the Berlin night.

"I've given the assistant coaches a few tips, but we'll definitely enjoy the party tonight, wherever it is," said the 29-year-old.

Germany coach Joachim Löw, who was in the stadium, said Bayern's success could only help the national team during June's World Cup in Brazil. "To win the title so early is an incredible achievement," said Löw. "Pep Guardiola has developed the team and made his mark in terms of dominance and possession. "Bayern have a mentality that demands unconditional success."

"It's unbelievable the way you have torn things up down there," said Klopp, whose second-placed side were held to a goalless draw at home to Schalke in the Ruhr derby. "You're so far ahead, we'd need a telescope to see you.

"It's a fantastic achievement."