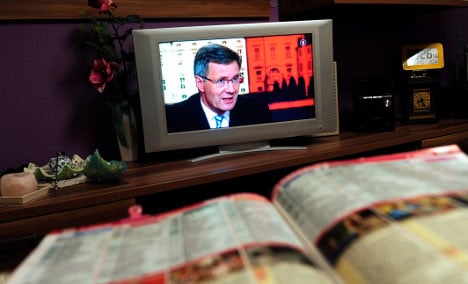 The TV and the lights were still on when police broke down the door of the first floor apartment in Oberursel near Frankfurt am Main last week, the Frankfurter Neue Presse reported on Tuesday.

Sitting on the sofa in pyjamas, with the TV listings for the first week of last September still lying open, was the partially decomposed corpse of a 66-year-old woman.

She had been dead for over six months.

The building's management had asked the police to break in when the woman's overflowing letterbox had finally come to one resident's attention.

A thorough search of the home gave no evidence of an unnatural death and police said they had ruled out any foul play.

It appears the deceased woman had had no children, close relatives or friends that she saw regularly and that nobody at all had noticed her absence.

Chief Inspector Ulrich Demmer of Hesse police department told the paper he could not understand why none of the neighbours in the 30-flat block had noticed not seeing her regularly in the hallway.

"Someone should have noticed," he said. "Unfortunately, societal and demographic changes mean that such cases are increasing. Causes are lacking social ties and, in part, the desire for anonymity."