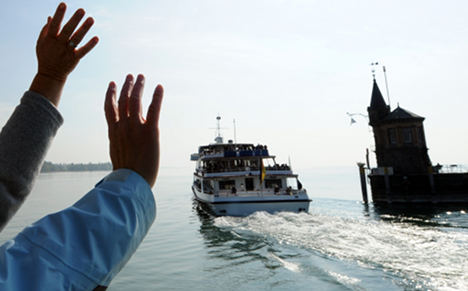 Once a year, swingers hop aboard the MS Schwaben for a weekend of partner swapping on Lake Constance, in southern Germany. But the mayor of Constance wants to put a stop to it.

“This is not about sexual intolerance or being prudish,” Mayor Uli Burchardt said in a statement released last week.

“It is only about whether the BSB should be chartering boats for commercial sex events,” said Burchardt. He explained that swinger parties were not a business model that fitted with one of the biggest tourism operators in the state.

“I have to clearly reject this, as the company is committed to tourism,” said Burchardt. As mayor, he is also head of state-owned BSB.

The lake's popular floating “PVC and Leather” parties will keep running though, as Burchardt deemed them “simply a party” and not an event encouraging swapping sexual partners.

Criticism began flooding in after Friday's announcement and organizers Dream Team Erotik Events have even invited Burchardt to a public debate. He took to Twitter to say he “has nothing against swinger events.”

An open letter from two Austrian tourists seen by regional newspaper the Südkurier told the mayor that the swinger party – which attracts people from lots of countries – gave tourism in the area a boost.

“We travel every year to the swinger ship, book a hotel, eat in the area and buy a suitcase full of bits and bobs and head off for a nice trip on the boat,” said the two women who co-wrote the letter. “If that's not good for tourism, what is?”

Critics feel, the Südkurier reported, that the decision was more driven by a letter from Constance's branch of conservative party the CDU – of which Burchardt is a member – urging him to put a stop to the swinging.

“A family day out being preceded by a swinger event is destructive for the BSB's reputation,” said the CDU letter.

As things stand the 2015 event will not take place. Whether the upcoming 2014 event, scheduled for August 30th will go ahead is still under discussion.

The mayor took to Twitter to make his views known.